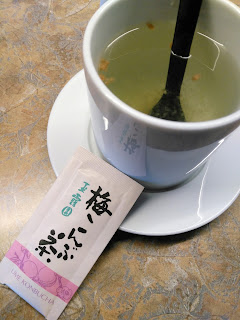 Tastes more like a salty seaweed soup - being made of Japanese powdered seaweed that makes sense. Not really a tea. Just that I found it in the same draw as other teas. Difficult to taste the plum. 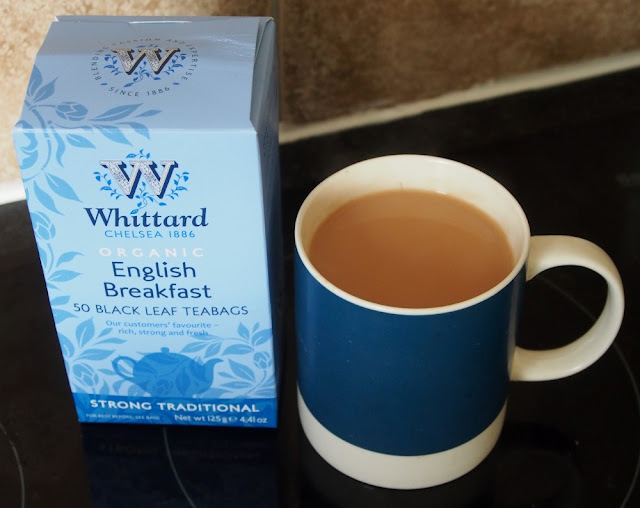 Recently Whittard (Chelsea 1886) contacted me asking me if I wanted some tea to review. Of course, was my reply. I do love a good English Breakfast tea. So here's one of the teas they sent me. It comes in a light blue box, containing 50 teabags, and says "Our customers favourite - rich strong and fresh" as well as "Strong Traditional". The teabags come in a foil wrap bag for freshness.

After brewing the tea, and giving the teabag a light squeeze above the cup after removing, then adding milk the tea has quite a rich colour. The flavour matches this, being quite "meaty" and refreshing, with a strength that you can feel. If this was coffee, I'd say it has quite a kick, but as it's not I'll simply say it packs quite a punch. The tea is from Tanzania, and is Whittard's own house blend. The instructions insist on fresh water, and are wise words to follow. The tea is strong and shouldn't be over-brewed, or stewed, and does leave a little bit of a dry mouth after drinking, so would be good followed by some water. I suspect this would go extremely well with the English Fry-up. The tea is available in the Whittard shops or online at www.whittard.co.uk and is definitely recommended. 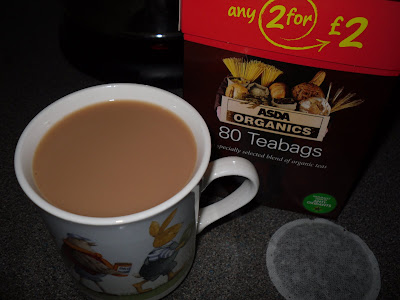 ASDA Organics 80 Teabags - a specially selected blend of organic teas - priced at 2 boxes for £2 this is quite good value for money, others in the range include Fairtrade tea. The organic tea is quite dry with a slight bitter taste, it's quite refreshing and also fairly strong, considering the small size of the round tea bags. Makes quite a dark cup of tea that is tasty and reminds me of Dilmah Ceylon supreme tea, and leaves a slightly dry taste in the mouth after finishing the cup. It's grown and packed to organis standards and is the produce of more than one country (shame they don't tell us which countries). Worth trying if you have access to ASDA. 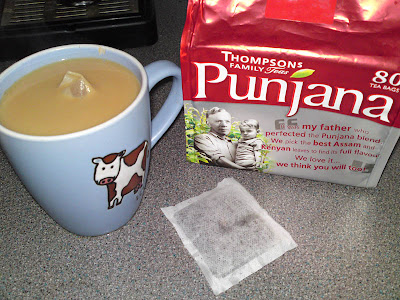 Thompsons Family Teas - Punjana - this makes a strong cup of tea due to large tea bags - the tea leaves your mouth dry even with milk, and the tea is slightly bitter. If you like a strong cuppa then this is probably one of the strongest tasting. 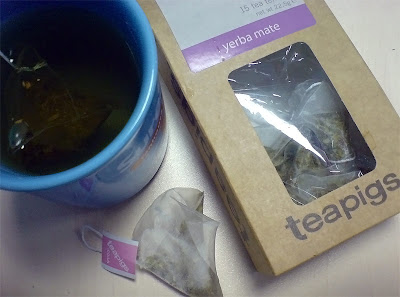 Teapigs - yerba mate - energy brew - 15 tea temples - £5 GBP from Coffee Union - cheaper on the www.teapigs.co.uk website. The back of the box said it was a "love or hate" kind of tea, so I had to try it. It's native to South America and it's meant to "increase focus and alertness while helping with detoxing and weight loss". Apparently - I find it soothing and relaxing, with a real "...aaaah" (and relax) sensation. It's got a slightly smokey aspect to it and reminds me of Masala Chai tea, but with a sweeter end of cup taste. Great for work day afternoons it's relaxing and soothing, but doesn't make you too sleepy. (picture added) 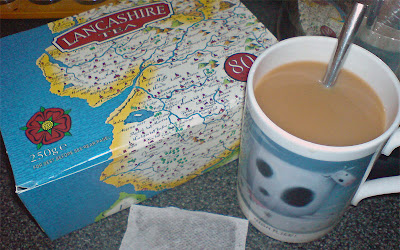 Lancashire Tea - from Asda - it had a label on the shelf saying "locally produced" and it is, being made about 10 miles away in Newton Le Willows (it's in Merseyside, but Merseyside was historically a part of Lancashire anyway, so I'll happily call in Lancashire tea). I was surprised by how nice it tastes, considering the old fashioned packaging and tea bag style (square). They recommend a brew of 3 - 4 minutes. I went for 3 minutes, and had a strong (but not bitter) cup of tea. They also suggest pouring the tea onto the milk, I'm not so sure about that, but each to his own. There's even a history of Lancaster printed on the bottom. If you can find some, then I'd say buy it!

ASDA are selling 160 bag boxes of Twinings Everyday Tea (link to our review) for £3.89 with a Free Bodum Mug in White. Or alternatively you can buy two for £7 and drink twice as much tea. 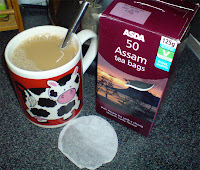 ASDA Assam tea bags (50) "Pure Assam tea with a strong smooth malty flavour" - foil wrapped "for freshness". This make a tasty cup of tea - like single malt whisky - they're not a bland as some "blended" teas *cough* pg tips *cough* (sorry monkey). There's a fairly strong taste, not too strong, and quite moorish, with a very slight bitter after-taste. Not one of the best teas in the world, but good, and worth a try. 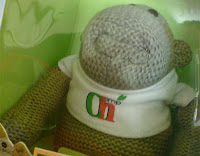 Free Monkey with PG Tips 160 Pack at ASDA for £2.93. Monkey, previously worked on ITV Digital but after the collapse spent his days fathering children chimps, all of them he sold into slave labour to PG Tips to work on the PG Tips Tea farms (it's much cheaper to employ knitted monkeys than real monkeys), you can give one of these poor monkeys a good homes each time you buy a pack of PG Tips... 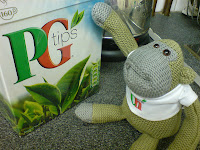 The monkeys are eager to give a helping hand now that you have set them free, but even I struggled to open the plastic wrapping on the packet... The instructions on the side of the pack were short but promised great things: "there you have it; a delicious brew fit for a monkey." (assuming you're a monkey!) PG Tips are members of Ethical Tea Partnership which is perhaps why they've now decided to set all the monkeys free... 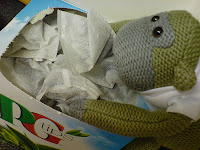 Once you work your way through the annoying perforated cardboard, the monkey quickly dives in to find you the perfect PG Tips Pyramid tea bag. I asked monkey why the tea wasn't foil packed, but the monkey simply mumbled something about the cost of foil packed freshness, and something about it not growing on trees. 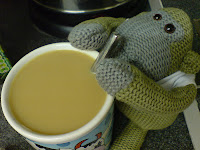 A few minutes later and we were ready, I would have offered the monkey some, but decided that it was too hot and it would probably stain his white t-shirt. Tea Tasting: The tea tasted fairly fresh, mild, and once again wasn't very satisfying, it seems sort of dull, bland even, lacking in flavour. I'll ask the monkey to try harder next time.

While most of us don't like it when tea cups are covered in tea stains as it's often considered a sign that the cup hasn't been washed properly, artist Bethan Luara Wood has made some tea cups that stain attractively: "The interior surface of the cup is treated so as to stain more in predetermined places. The more the cups are used, the more the pattern is revealed. Over time they will build up an individual pattern dependent on the users personal way of drinking tea." 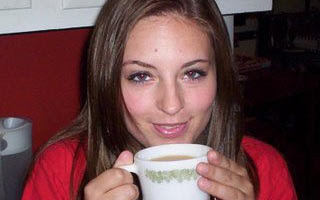 Tea Birds: "Nothing but pictures of cute girls at tea. A tea blog like no other." - The site seems to be dead, so why not check this site out instead: http://theteabirds.blogspot.co.uk/

Best Teas of 2006
The first annual "Best Teas" awards are listed below - find out what should be on your shopping list for great tasting tea!

1 - Thunderbolt Pure Darjeeling - sourced direct from Thunderbolt Tea it's tea how it's meant to be experienced in it's full authenticity.
2 - Monkey Picked Tea - Expensive but gorgeous big leaves make and unique-ness make it a great party tea.

Best Teas of all time

1 - Yorkshire Gold - reviewed back in 2004 there is no tea that I've tasted so far that betters Yorkshire Gold for a proper authentic british cuppa tea. With bags jammed packed full of tea you're bound to experience the full tea flavour.
2 - Dilmah Ceylon Supreme Tea - best when bought in it's origin: Sri Lanka. If you can't make it out there, then it should be available in your local Tesco, and it still tastes great! 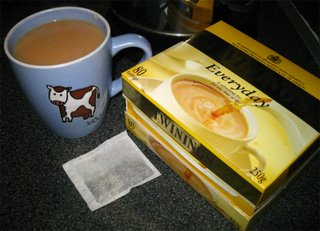 Twinings Everyday "A refreshing tea for any time of day" It's somewhat expensive for 80 teabags at around £2. It's a relatively mild, but refreshing and tasty cup of tea, I found it worked best in medium - small cups rather than in large cups where it was perhaps overly weak. To get a good flavour out of it took a bit longer than your "average" cup of tea from other brands. As with all teas, tastes best made with fresh boiled water (not re-boiled). Could be worth a try, but seems expensive considering it doesn't offer anything particularly "special" for the price, apart from the prestigious name, and pleasing packaging.

www.looseleaf.info - "This site is dedicated to helping you uncover all the great things about loose leaf tea. Check back often for new articles, features, great deals, and more!"

lots of great articles on tea. highlights include: "brewing tea - is hotter better?" and "Mass produced teas - what's it worth?" - Make sure you check it out! 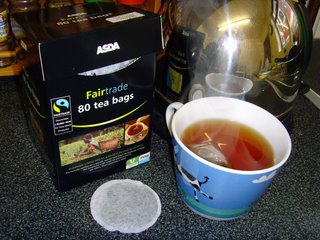 ASDA Fairtrade 80 tea bags "Guarantees a better deal for growers in developing countries" It's sourced from Keigoi tea producers in Kenya and "produces one of the richest, flavoursome teas in Africa". It's nice to see an ASDA's "own brand" fairtrade product, as it means fairtrade products should be even more widely available, and should start becoming much more mainstream. The box even comes with some instructions on how to make a cuppa tea, I've summarised it below:

Place one tea bag in a cup, pour on freshly boiled water, stir then leave for 1 minute (for medium strength, 3 minutes for strong brew), stir again then remove bag.

How does it taste? It tastes good, better than average, by that I mean that the tea has a noticable taste of tea, a refreshing taste, not overly weak like some teas, although the tea is slightly coarse tasting. Definitely worth trying.

Tea healthier drink than water "Drinking three or more cups of tea a day is as good for you as drinking plenty of water and may even have extra health benefits, say researchers." BBC News Article.